CATHOLIC JOURNALISTS: BEAR WITNESS TO THE VALUES OF FAITH

"Half a century after the foundation of the UCSI many things have changed", writes the Holy Father. This change has been "more visible in areas ranging from science to technology, from the economy to geopolitics; less perceptible but deeper, and more worrying, in the field of modern culture, in which respect for the dignity of the individual seems to have notably diminished, along with a sense of such values as justice, freedom and solidarity, which are so essential for the survival of a society".

The work of Catholic journalists, says the Pope, "anchored in a heritage of principles that have their roots in the Gospel, ... is even more arduous today. To your characteristic sense of responsibility and spirit of service, you must add an ever great professionalism, and a capacity for dialogue with the 'lay' world in the search for shared values".

After telling the journalists that "you will be listened to more readily when the testimony of your own lives is coherent", the Holy Father assures them that "no small number of your 'lay' colleagues expect from you the silent witness - not only in appearance but in substance - of a life inspired by the values of faith".

Benedict XVI writes of his awareness that they are committed to "an ever more demanding task, one in which spaces for freedom are often under threat, and economic and political interests often take precedence over the spirit of service and the criterion of the common good.

"I encourage you", he adds in conclusion, "not to make compromises in such important values but to have the courage of coherence, even at the cost of personal sacrifice. Serenity of conscience is a priceless quality".
Posted by Association of Pauline Cooperators No comments:

Call to Conversion; Path of Communion

"The call to conversion - strengthened by St. Paul's own witness - rings out today at the end of the Week of Prayer for Christian Unity, which is particularly important in the field of ecumenism. The Apostle shows us the right spiritual attitude in order to progress along the path of communion. 'Not that I have obtained this or have already reached the goal, but I press on to make it my own, because Christ Jesus has made me His own'. Of course, we Christians have not yet attained the goal of full unity, but if we allow ourselves to be continually converted by the Lord Jesus we will surely reach it". Benedict XVI
Posted by Association of Pauline Cooperators No comments:

Religious Landscape in the United States

In Spring 2008, the Pew Forum on Religion and Public Life published the results of its U.S. Religious Landscape Survey, a national sampling of the religious affiliations of more than 35,000 Americans undertaken over the summer of 2007. The news drawn from it, at least as widely summarized in the media, amounted to three main headlines. One: For the first time in American history, Protestantism is close to becoming the faith of fewer than half of all Americans (51.3 percent). Two: There is a substantial minority of religiously unaffiliated Americans (16.1 percent). And three: The Catholic Church would be much diminished in its current share of the U.S. population (23.9 percent) if it were not for Hispanic immigrants.
see the entire article at the Boston College site:
http://bcm.bc.edu/issues/fall_2008/c21_notes/balancing-acts.html
Posted by Association of Pauline Cooperators No comments:

Dignitas Personae (The Dignity of a Person)
An Instruction from the Vatican Congregation for the Doctrine of the Faith (CDF) on ethical issues arising from biomedical research, provides guidance on how to respect human life and human procreation in our heavily scientific age.
http://www.usccb.org/comm/Dignitaspersonae/
Also see Vatican.va
Posted by Association of Pauline Cooperators No comments:

The Family a Living Gospel

"The Master is definitely present in the family that listens to and meditates upon the Word of God, that learns what is most important in life from Him and puts His teachings into practice. In this way individual and family life is gradually transformed and improved, dialogue is enriched, the faith is transmitted to children, the pleasure of being together increases and the home becomes more unified and consolidated, like a house built upon rock".

"With the strength that comes from prayer, the family becomes a community of disciples and missionaries of Christ. ... Through the experience of filial obedience to God, faithfulness and generosity in welcoming children, care for the weakest and readiness to forgive, the family becomes a living Gospel which everyone may read". Benedict XVI January 2009
Posted by Association of Pauline Cooperators No comments: 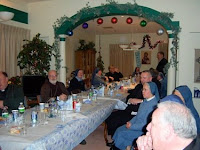 "On Sunday night, the Sister Disciples of the Divine Master hosted me and a number of priests for an Epiphany gathering at their convent on West Street in Downtown Boston. After praying together we went upstairs for a great meal, lots of laughter, and a Christmas Carol Sing-Along. It was a wonderful way to celebrate the twelve days of Christmas! " 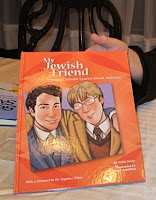 (Another day) "that day I met the chairwoman of the Anti-Defamation League’s New England regional board, Esta Gordon Epstein, and the new regional director, Derek Shulman. During our meeting, they gave me copy of a new book, “My Jewish Friend,” which the ADL is now using in various outreach and educational programs. "

Vocation and Mission of the Laity

The Church of the Third Millennium will need to encourage all the baptized and confirmed to be aware of their active responsibility in the Church’s life. In a special way it will be necessary to discover every more fully the specific vocation of the laity, called “to seek the kingdom of God by engaging in temporal affairs and ordering them according to the plan of God.” They have their own role to play in the mission of the whole people of God in the Church and in the world…by their work for the evangelization and the sanctification of people. (The New Millenium # 46)
Posted by Association of Pauline Cooperators No comments:

Introducing our God: Silence and Signs

Atheists and believers alike, Michael Novak contends, stand on common ground. No one can reach God through the senses, imagination or memory; not even by a clear, distinct concept. “The only knowledge of God we have through reason…is dark—and by the via negativa, that is, by reasoning from what God cannot be. Direct empirical knowledge of God could only be of a false God.” Here too Novak is articulating a central affirmation of both Judaism and Christianity.
America Magazine; December 8, 2008 Review of No One Sees God: the dark night of Atheists and Believers by Michael Novak

“God speaks quietly. But he gives us all kinds of signs. In retrospect, especially, we can see that he has given us a little nudge through a friend, through a book, or through what we see as a failure—even through accidents. Life is actually full of these silent indications. If I remain alert, then slowly…I begin to feel how God is guiding me.” Pope Benedict XVI
Posted by Association of Pauline Cooperators No comments:

Evangelization: we are called to offer the world

In chapter five of the Letter to the Romans, "St. Paul describes his missionary work among the peoples of the world to construct the universal Church as a priestly activity; the goal of missionary activity is, we could say, cosmic liturgy: that all people united in Christ - the world - may become glory of God. The self-giving of Christ, implies the tendency to attract everyone to the communion of His Body, to unite the world. Only in communion with Christ - the model Man, one with God - can the world become as all of us would desire it: a mirror of divine love. This dynamism is ever present in the Eucharist, this dynamism must inspire and shape our lives". Pope Benedict XVI

"The first feature of the good Pastor is to know their sheep (Jn 10:14). The Pauline family has an enormous opening onto the whole world, and in its whole apostolate...Its aspirations are those of the heart of Jesus. With Mary's eucharistic spirit we must implore everything from Jesus, the Divine Master, present in the Host."
Blessed James Alberione
Posted by Association of Pauline Cooperators No comments:

Paulines Serving the Poorest of the Poor 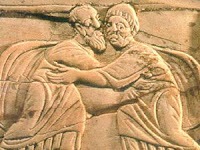 "At the beginning of the new year", he said, "my first objective is precisely to invite all leaders and ordinary citizens not to be disheartened in the face of difficulties or failures, and to renew their commitments".

The Holy Father noted that "in the second part of 2008, an economic crisis of vast proportions arose. This crisis must be examined in detail as a serious symptom that requires intervention at its roots. It is not enough - as Jesus would say - to take a piece from a new cloak to patch an old one. Putting the poor in first place means decidedly moving toward the global solidarity that John Paul II pointed out as necessary, co-ordinating the potentialities of the market with those of civil society in constant respect of the law and tending always to the common good".

"Jesus Christ", the Pope concluded, "did not organize campaigns against poverty but proclaimed the Gospel for a complete ransom from moral and material misery to the poor. The Church, with its unceasing labors of evangelization and human promotion, does the same. We call on the Virgin Mary, Mother of God, to help all men and women walk together the Path of peace".

The Pauline perspective is one of creating a different economic space - the space marked out by the body of Christ. The economy of giving "I came that they may have life abundantly." For Paulines liberation must include liberation from consumerism and the subtle manipulatins media use to exert upon the very hearts and minds of people.
Posted by Association of Pauline Cooperators No comments:

Evangelization Place: A space for seeking and deepening

Welcome to Evangelization Place weblog!
A gathering place for you to seek and deepen the Christian message and incarnate it in society.

Prayer Souces on the Internet

First Apostle of the New Evangelization

“Today, what gives the main testimony to Jesus Christ is the Good Press.... The world needs a new and profound evangelization… There is urgent need for new missionaries, and numerous ones, for young people full of determination and enthusiasm so that our press, the Christian press, may come into all families. Missionaries are needed! New missionaries for this new and fertile apostolate!” Blessed James Alberione, founder of the Pauline Family.

In John Paul II’s words, Blessed James Alberione is “the first apostle of the new evangelization.” Not only because he used modern media to proclaim the Gospel, but because, like Paul at the dawn of Christianity, he heralded in his person and his message the central call of the Gospel: total configuration with Christ. 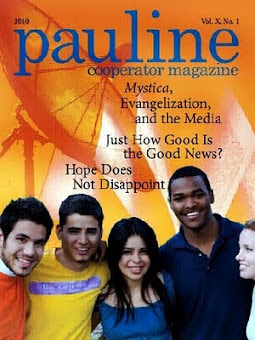